The BenQ MOBIUZ EX2710 is a 144Hz gaming monitor that is quite complete in terms of performance, as it gives us this refresh rate in an 8-bit IPS panel with 1080p resolution that integrates special features such as HDRi and more additions such as an ambient light sensor, powerful speakers, etc.

The MOBIUZ product range of the well-known monitor manufacturer BenQ clearly focuses on gaming, with great differences compared to the other sub-brand of the company, Zowie. In the case of the latter, we have an almost unique approach to response times and refresh rates, although this means sacrificing image quality. MOBIUZ seeks the best in the gaming world with the best possible visual quality, so without a doubt our expectations are high. Will they be able to overcome them? Let’s see it. 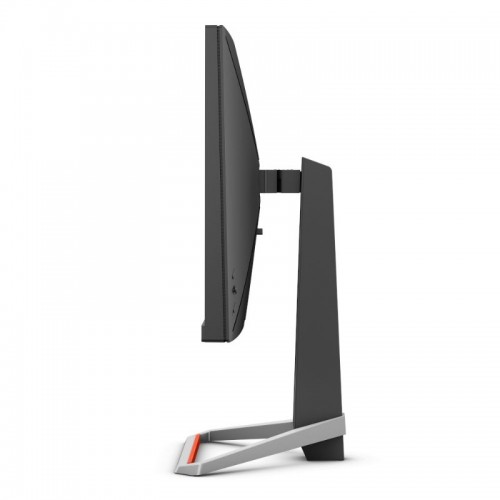 The base of the stand is perhaps the most distinctive and differential design element of the BenQ MOBIUZ EX2710, as far as external design is concerned. Its aesthetic parts, made of plastic, are covered in a silver color with orange accents, giving it a special personality that reminds us that this is a gaming monitor, but in a way that it will not detract from any setup aesthetically.

The stand itself is quite well built, also following a very aggressive design line to stand out from a normal office monitor. The quality sensations that they leave us are not spectacular, but neither is it what is required of a 300-euro monitor with these characteristics. Rather, what we have is a decent, adequate, reliable structure … in short, it does not surprise but it does not disappoint either.

The external Design of the monitor is made mostly of plastic, with a design that results in a quite good combination between elegance and the aggressive lines that a monitor oriented to gaming seeks. This is what can be noticed the most at the back, where we anticipate that we will have a significant effort on the part of the brand to facilitate cable management.

In general we are satisfied with the Design of the monitor, which does not give rise to high praise, but it certainly fits expectations and leaves us no complaints. We don’t have a particularly slim monitor either, but we don’t see the need for it to be like that, plus that way we get rid of having to use external power supplies to plug in the monitor.

At this point we would like to highlight a curious bulge that we can find at the bottom of the monitor. The truth is that at first glance it seems that it is a space for an infrared that allows us to control the monitor with a remote, but the truth is that it is something totally different. What is “hidden” there is an ambient lighting sensor used both for the HDRi that we explain now and for the BI + (Brightness Intelligence) mode , which will adapt the brightness of the screen to the ambient lighting so that the user automatically obtains the level. more reasonable.

What we also have is a dedicated button for HDRi , which is a patented technology designed to give a smarter HDR experience, reducing overexposure levels as well as incorporating a mode designed specifically for games. The company relies on this technology so much that we have a dedicated button for it on the front of the monitor, although it is obvious that in such a panel it will not work miracles, but each user can easily try it and determine if it is useful or not.

Let’s continue discussing the connectivity offered by the monitor. What we are basically offered are two HDMI 2.0 and a DisplayPort 1.2, obviously at this resolution and refresh rate we don’t have a special need to use DP, so the layout is fine. We also have an audio jack.

Something that is worth commenting at this point is the fact that in the lower part of the monitor we have speakers. Another very interesting feature is the plastic cover to hide our wiring as much as possible, which is combined with holes in the base to allow easy passage of the cables. It would be a bad design decision not to do the latter, and we expected it, but the detail of the lid was a pleasant surprise. Let’s see now what is the difference between having the cables without the cover and with it: 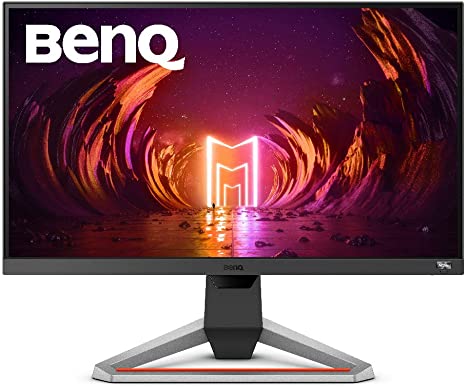 The ergonomics is a key aspect of a gaming monitor, it is quite normal that one is sought freedom of movement particularly large, so that it matches the needs of the player. Even in productivity uses we are very interested in monitors that have height adjustment and a generous tilt.

In the case of the BenQ MOBIUZ EX2710, the feeling we have had is the same as the one given by the construction of the base: it is not spectacular, but it is certainly more than decent, good for its price range. And it is that we have a generous adjustment in height of 130mm together with an inclination of between -5º and + 10º (down / up), in addition to being able to turn the panel to the left or right.

The only thing we miss quite clearly is that the screen can be rotated to make it vertical, but it really is a feature that does not make much sense to demand in a gaming monitor, where such a configuration is not going to be used. But some programmers by day and gamers by night or vice versa would surely be interested in such a possibility.

Be that as it may, we insist that the ergonomics of the BenQ MOBIUZ EX2710 is more than adequate, and the versatile height adjustment allowed is especially appreciated.

Let’s now go with the panel that stars this gaming monitor. We have 27 inches of diagonal with 1920 × 1080 resolution, and the two star features of the monitor are undoubtedly the 144Hz refresh rate and the type of panel, which is IPS. TNs are becoming less and less common in gaming monitors, and this BenQ is one of the clear examples that this is happening.

The fact of being in front of a panel of this size and resolution makes the pixel density not the most attractive precisely, since this type of monitors have very easily distinguishable pixels at short distances. But precisely BenQ offers a MOBIUZ EX2510 for those who are more fans of 24 “, and it is a mistake to think that no one prefers 27” in 1080p. Many find it an ideal size, either because of the distance at which they will be located or because the pixel density is adequate enough and they do not need something very remarkable.

Continuing with the specifications, we stay in what interests gamers with the response times announced by the manufacturer, which are 1ms MPRT and 2ms GtG, although everything will depend on the overdrive configuration used.

Finally, getting back to the color specs, the monitor uses true 8-bit colors , versus 6-bit + FRC from other competitors. We also have a gamut of 99% of the sRGB space, but we know that the data that BenQ gives never exceeds 100%, and we will probably see how it does.

We are going to verify all these color and panel specifications below with our colorimeter, which will allow us to know to what extent all the indications made by the manufacturer are true.

The MOBIUZ EX2710 is BenQ’s bet for the 144Hz gaming market at 1080p resolution. It is a segment that is increasingly populated by models, and it is important to have a good position by offering a differential product.

In this case, we have found a very complete monitor in terms of performance, thanks to its full ergonomics with height adjustment, special functionalities such as HDRi or its ambient light sensor , a contained response time, or features such as the panel. Real 8-bit IPS without FRC.

Our tests have shown that, in general, BenQ’s great promises in terms of image quality are fulfilled: and this EX2710 really combines the needs of users who, without needing to reach GtG response times of 1ms, want combine the best gaming experience (fast, with a good refresh rate and free of ghosting) with a good image quality that gives the best of itself for multimedia content, daily productivity or even the games themselves.