The design of Realme C12 still follows the same guidelines as the realme C11, although there are differences. But inspired by the same geometry Especially the back design with 3 gradation levels, which is formed from the trapezoidal intersecting line. Causing different reflective effects. 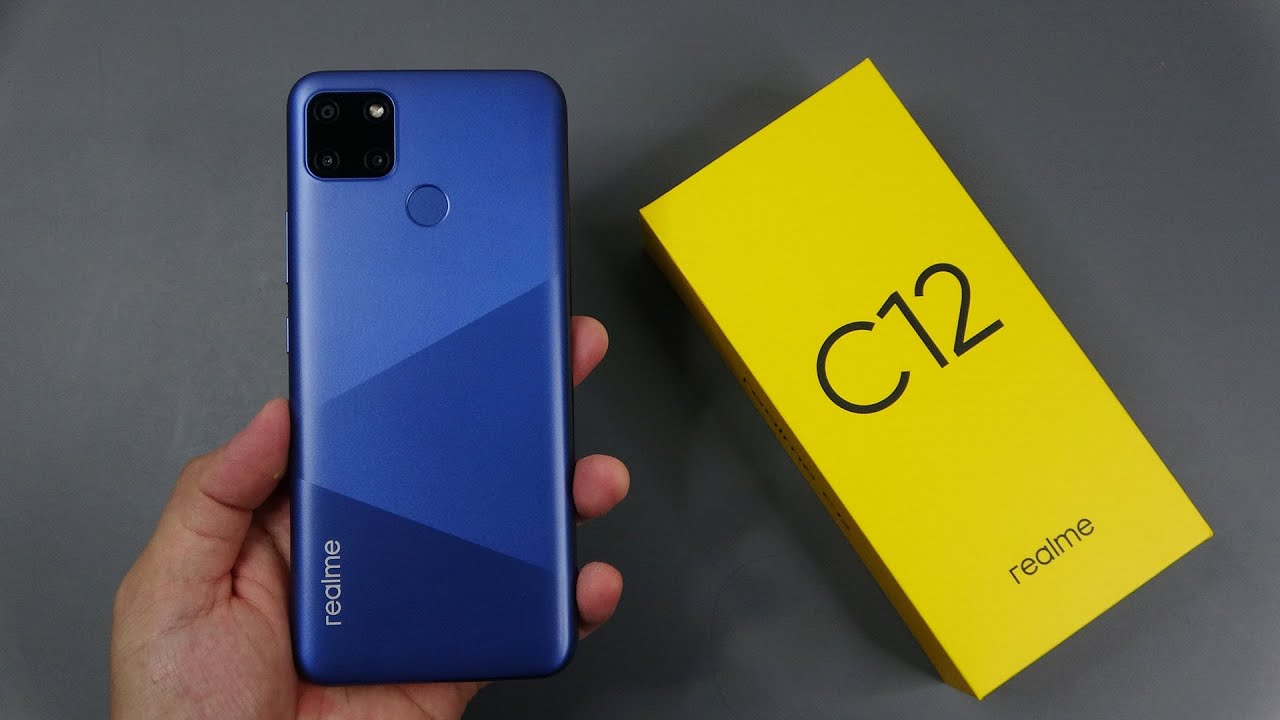 The back of realme C12 is treated with 300 minutes of precision coating and polishing by using a 5-axis radium carver from a leading German company. To achieve a curved sculpting line and a glare effect. Including beautiful colors to touch And prevent fingerprints and scratches It is produced in 2 colors: Marine Blue and Coral Red.

The back is also eye-catching with the design of the triple rear camera system with LED flash, arranged in a balanced 2 x 2 grid layout, in a perfectly rounded square frame.

realme C12 is equipped with a fingerprint scanning sensor, which is not found in realme C11, can quickly scan your finger. And also supports the Face Unlock feature, scans the face to unlock.

Turn over and look at the front. You’ll find a 6.5-inch mini-drop display with a resolution of 1600 x 720 pixels with an aspect ratio of 20: 9, ideal for watching video content and playing games.

realme C12 has been upgraded to the internal structure of the display. Using a process overlap (Stack Process) by pulling components. Come close perfectly To make the area of ​​the teardrop notch 30.9% smaller, resulting in the display of realme C12 has an 88.7% screen-to-body ratio.

Inside the notch, water droplets Has installed a selfie camera AI Selfie Camera resolution 5 megapixels and above is the position of the speaker.

The side edges are thin 9.8 mm. Equipped with a volume knob. With the power button on the same side.The other side has a Triple Slot SIM card tray, supports 2 SIM cards, Dual nano-SIM and can place an additional MicroSD card with a maximum capacity of 256GB.

realme C12 has a front camera installed in the notch. With a resolution of 5 million pixels, support AI Beauty, Portrait, HDR and Pano selfie shooting modes for taking selfies in a wider perspective. In addition, the front camera can also shoot video in Full HD 1080p resolution with Timelapse mode.

Realme C12 has been upgraded to the rear camera system in addition to the previous model with 2 lenses to 3 lenses, balanced with the LED flash in a square frame. And also improve photography in low light conditions With all 3 rear cameras performing different functions as follows:

The realme C12’s rear camera also comes with a Super NightScape mode for better shooting at night or in low light conditions. By using an algorithm to help capture multiple frames at different exposures. Before choosing the best frame to combine into a single image. This results in more vivid and detailed night time photos than other smartphones in its class.

There are also HDR, Portrait, Beauty, Panoama and Expert modes for manual camera adjustments. Video shooting section Supports resolutions up to Full HD 1080p at 30 frames per second. With Timelapse and Slo-mo modes.

Realme C12 receives a large battery capacity of 6000mAh, can standby for up to 57 days, talk time for 46 hours, watch YouTube video for 28 hours, music via Spotify for 60 hours, use Instagram for almost 24 hours and play. PUBG Mobile game for 10 hours.

App Quick Freeze helps freeze applications that are not in use.
Screen Battery reduces the display of some effects. To optimize the battery
Sleep Standby saves the power of the smartphone while sleeping.

Realme C12 also has a power saving mode (Super Power Saving Mode) that extends the life of the battery to be exceptionally long. By reducing the brightness of the display Reduce the automatic lock screen time to 15 seconds and disable the application to completely disappear from the screen.

Before activating the Super Power Saving Mode feature, users can select six frequently used applications to keep them running even in power saving mode. Without affecting the general use of daily life.In addition, realme C12 also supports use as a Power Bank to charge the battery for smartphones or other devices. Via OTG cable.

Realme C12 runs on the basis of the Android 10 operating system, covered with realme UI, which has been developed from the inspiration of a new generation of lifestyles. Whether it is a system of colors, icons, wallpapers and animations. They are all collectively known as Real Design.

realme UI helps to improve the operation of the system faster. It can reduce the time of App Booting up to 25%, reduce touch lag 35%, Game performance is increased by 20%, the overall experience is smoother by 20%, Battery life is increased by 10% and the battery life is reduced. 35% power consumption when on standby overnight.

Dark Mode Change the theme of the User Interface to a dark color scheme. For the comfort of the eyes And can turn on Dark Mode automatically at night.

Focus Mode is a mode that helps users relax from the outside world. The system will pause the scheduled application and turn on the DND (Do Not Disturb) mode to turn off the disturbing notifications and turn on Ambient Sounds.

3-Finger Selected Screenshot Take a screenshot by tapping and holding the screen with 3 fingers.

Personal Information Protection Personal information protection system With encryption to secure all photos, videos, audios, documents and archives, and Dual Mode Music Share, a dual-channel music sharing mode. You can connect two wireless headphones at the same time to listen to music or watch content together. Without disturbing other people in the same area.

realme C12 is still one of the top choices. For anyone who is looking for a smartphone that offers good value for money or is interested in buying a realme C11 but can not buy it. Which is not to be regretted because realme C12 has been upgraded from realme C11 to be more efficient. Whether it increases the battery capacity from 5000mAh to 6000mAh, increased the number of cameras after 2 to 3 lenses, increased RAM memory from 2GB to 3GB and also added a fingerprint sensor.