The Asus TUF series continues with the same force as always when it comes to reliability and longevity of plates. Today we are going to analyze the Asus TUF Gaming Z590-Plus WiFi variant , being the most complete having Wi-Fi 6 connectivity, USB Gen2x2 , or aluminum heatsinks for its three M.2 slots. You will see that in overclocking capacity it performs wonderfully with its 14 + 2 phase VRM, and at the management level it is as complete as the more expensive models. Shall we start the review? 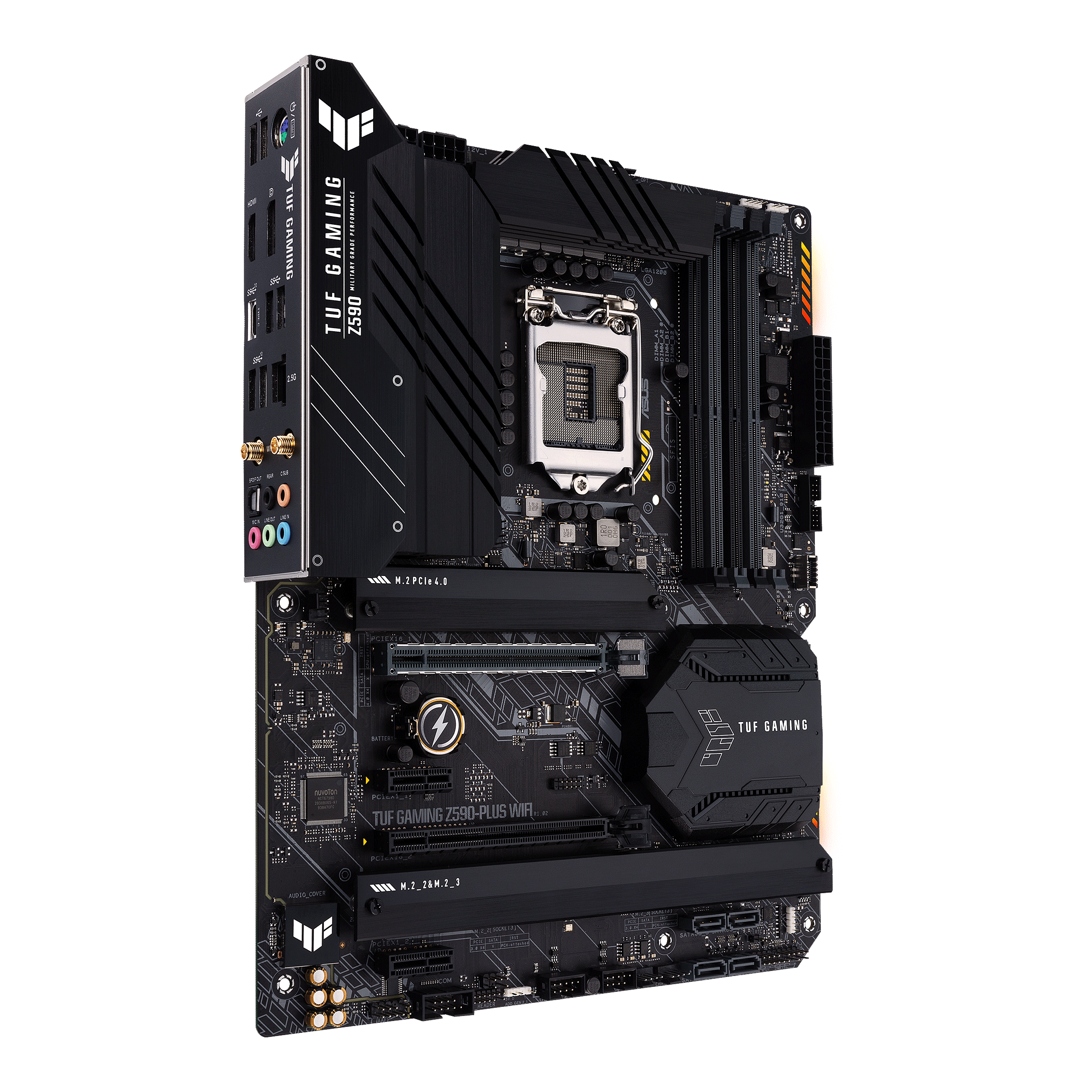 The TUF series could not be missing in this platform with Z590 chipset nor in the B560. More specifically, it is the model with the best features, and at the same time WiFi variant of the normal TUF Gaming so to speak. The style continues to give it a unique personality with predominant black color on an ATX board with cutouts in the SATA ports area and lower corner.

It will have two AURA Sync lighting zones on the right edge, as well as enough notoriety to illuminate chassis with a glass window. It can be extended by synchronizable strips thanks to 2 AURA Sync Gen2 compatible 5VDG headers , and another two 12VRGB headers for standard RGB strips. We wish we did not just two, but all SATA ports were integrated into the chipset oriented encapsulation 90 or relative to the plate. However, we must recognize that the traditional location will also be advantageous for chassis with lower openings and elbow-type cables.

The upper half of the board has a clear protagonist as is the extended size double heatsink system that passively cools the VRM. In this case, the upper cover of the port panel is also part of the heatsink block, thus increasing the exchange surface and giving a further point of quality to the construction and finishes of the plate. These blocks are not joined by heatpipe , although their grooves and level distribution make heat dissipation very well.

The DIMM slots do not have metal reinforcement, although the main PCIe x16 slot does. To differentiate the modules paired by Dual Channel, the connectors will be differentiated by color. As for the two full-format PCIe slots , they will have extended block tabs to improve accessibility. The integrated sound card area does not have a decorative cover, although the codec is isolated with an EMI shield so there is no interference of any kind.

This TUF certification ensures that the board will offer maximum durability and stability for our hardware. Of course , aluminum heatsinks have been added to cool the three present M.2 slots, although one of them will be common for the two lower connections. We really liked the cover that has been placed on the chipset heatsink, and on two of the SATA ports, giving a rather original touch to the board.

At the level of connections and on-board accesses, it is obviously not on par with the high-end models, and for example we do not have a Debug LED panel, internal interaction buttons or on the back panel like the Clear CMOS that would have been. a necessary introduction to the previous generation. In any case, we have EZ Flash function in BIOS for easy upgrade from USB drive.

Yes, we will have a post start panel, as well as 6 PWM / DC headers to connect fans or external RL pump, managed with the Fan Xpert 4 tool . With the help of the Asus suite of programs such as Armory Crate, MyAsus, AI Suite 3 or Turbo LAN, we can do a complete management of this board at the level of higher models. We will have implemented the Two-Way AI Noise Cancellation function in the sound part to improve the experience in broadcasts or chats while we play. 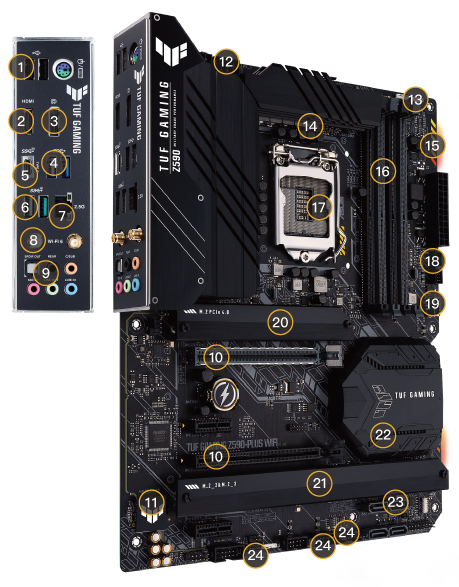 We now continue studying the power configuration of this Asus TUF Gaming Z590-Plus WiFi board , which will consist of 14 + 2 + 1 power phases , 14 of them will be for the Vcore and another 2 for the SoC. They will be powered by an 8-pin and a 4-pin EPS header , with solid ProCool contacts , although in this case without metal encapsulation.

The DC-DC conversion stage for Vcore and SoC will add 16 MOSFETS On Semiconductor NCP302150 , with a nominal capacity of 50A and high, low states and drivers in the same package (DrMOS). Along with them we have another SiC639 MOSFET to make up the 17 phases present. The digital control of these phases is carried out through a DIGI + ASP 1900B EPU , which will provide advanced control for the user from the BIOS.

The signal smoothing stage is completed with military certified TUF chokes and TUF capacitors that withstand up to 20% more temperature tolerance and 5 times longer service life (5000 h). In any case, the high-end plates will have elements of a higher category of course. The energy will be transported thanks to thick copper tracks distributed in the 6 layers that make up this plate.

The Z590 chipset is an upgrade compared to the Z490 that also repeats capacity with 24 PCIe 3.0 lanes and DMI 3.0 interface in the communication between CPU and chipset. It supports up to 14 USB 2.0 or equivalent in later generations, Thunderbolt 4, 2.5G LAN or Wi-Fi 6E natively. To these lanes will be added the 20 PCIe 4.0 that have the Rocket Lake processors, making a total of 44 and thus exceeding the capacity of the AMD Ryzen + X570.

This motherboard will support up to 128 GB of DDR4 RAM with a maximum clock rate of 5133 MHz . This will be thanks to supporting XMP 2.0 profiles and the Asus OptiMem II technology present in it. As always, the slots support Dual Channel, now adding joint CPU + RAM overclocking thanks to new features introduced by Intel’s 11th Gen processors. 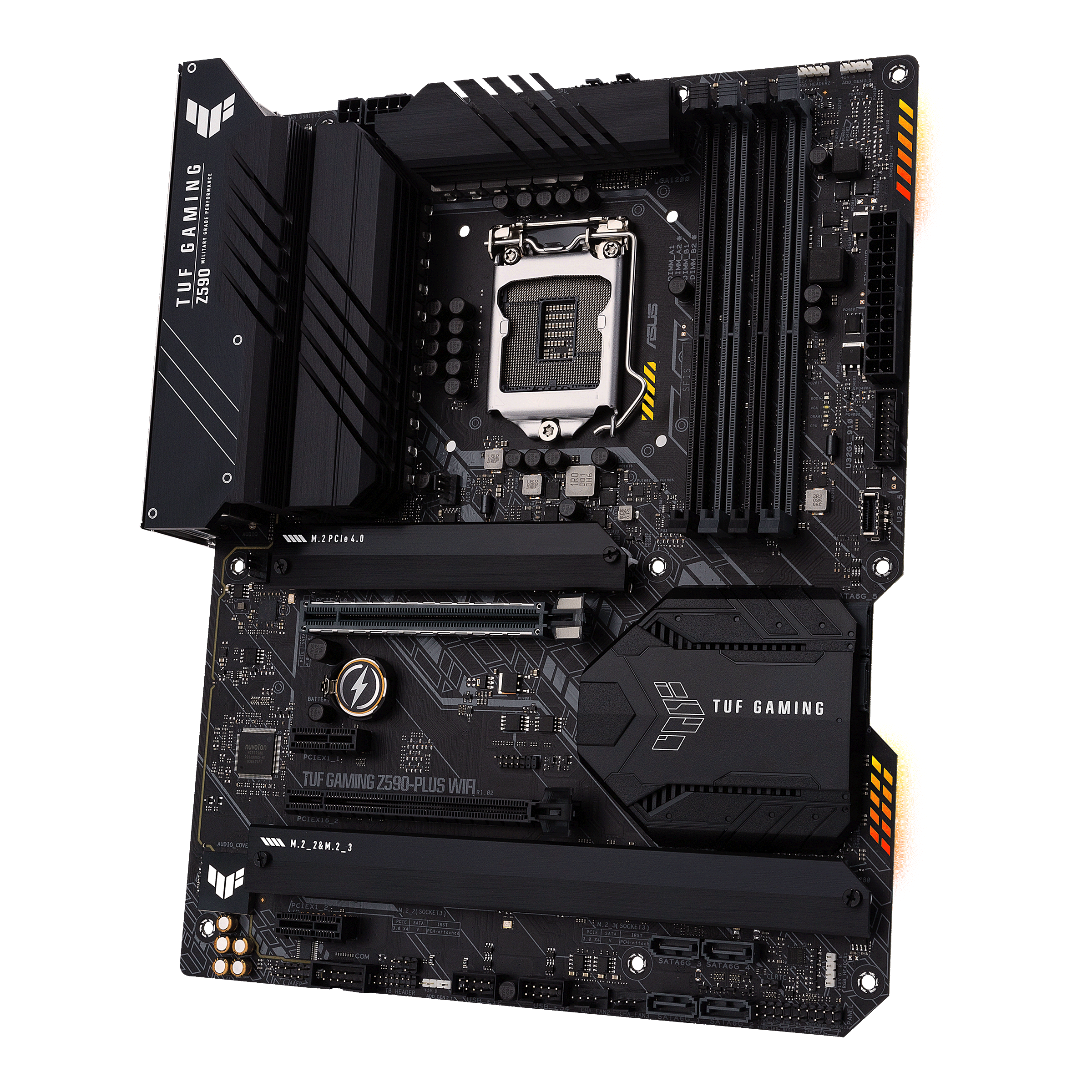 This Asus TUF Gaming Z590-Plus WiFi has two PCIe slots in full format and another two in x1 format . There will be a total of 4 slots of which the manufacturer does not mention anything about MultiGPU capacity and the logo is not present on the back of the plate. The operation of these slots will be as follows:

For practical purposes, the capacity will be enough to install for example a dedicated GPU + Thunderbolt card + USB expansion cards, sound or 10G LAN. The lanes are used to the maximum, and without being shared, so that the user should not have any concern in the free use.

The storage configuration consists of 6 SATA III 6 Gbps ports and a total of 3 M.2 slots, two of them supporting size 22110 and one 2280. They feature high-performance passive heatsinks to meet the needs of Gen3 and Gen4 SSDs from great power. These slots operate as follows:

We see that all the slots can be used without any limitation regarding the expansion slots. The SATA port limitation is also not a problem for almost any user, since it is unlikely to use all the capacity at the same time. SATA supports RAID 0, 1, 5 and 10 from BIOS , and the full Intel Optane Memory set.

We now continue to analyze the network connection capacity of this Asus TUF Gaming Z590-Plus WiFi . First, we will have an Intel I225-V chip, which supports 2.5 Gbps of bandwidth.

An Intel Wi-Fi 6 AX200 wireless network card is added to it , that is, it will not be the 6E version that is present in the top Asus boards starting with the ROG Strix Z590-A. It will therefore be the dual band version with a capacity of 2.4 Gbps on the 5 GHz frequency and 574 Mbps on the 2.4 GHz frequency.

The sound card consists of a Realtek S1200A codec , a version customized by Asus of the standard ALC1200 codec. In it we have a TUF Gaming package as EMI protection for the chip and an improved signal-to-noise ratio. Supports 108 dB SNR on stereo output and 103 dB SNR on line input , always with high-quality Japanese capacitors. As we have already discussed, it is compatible with Asus’ own AI ANC, available in Armory Crate software. And it also has a full 5 Jack and S / PDIF patch panel.

I / O ports and internal connections

The ports that we have available on the rear panel of the Asus TUF Gaming Z590-Plus WiFi will be the following:

At this point we believe that a PS / 2 is a mere resource to fill space on the panel, and it is useless. At least two or four extra USB 2.0 ports may well have been placed, since 7 connections seem a bit fair for a Z590 motherboard, even if it is considered mid-range. At least we do have a 20 Gbps port , and 4 interfaces above 5 Gbps.

It seems that this board has not included a Clear CMOS button on the panel, continuing the trend from previous generations to reserve these functions for more expensive boards. It is a nice touch to have two video ports and the complete audio panel, which will give us a lot of play to take advantage of the motherboard’s capabilities.

Internal connectivity is completed with the following elements:

The BIOS of this TUF Gaming starts from a design identical to the rest of Asus boards, although in this case with a custom skin for this board based on the black color. Likewise, the available options will be the same, with the corresponding cuts in connectivity, overclocking and VRM issues.

It will be added tools such as fan management by Fan Xpert 4 for fan control or RL , EZ Flash BIOS update and new additions such as fast activation of Resizable BAR or integration with programs such as MyAsus or Crate. Always one of the best that Asus has on their motherboards, and it will also shine in this mid-range for its good optimization.

TUF plates are still one of the best choices for the mid-range , both for performance and for their quality in construction and price. In this case, the good optimization of the BIOS in voltages and stability against overclocking with our 11900K, a CPU that is not too big for anything, is very remarkable .

We also have very good internal connectivity with 4 PCIe slots that do not share lanes and another 3 M.2 of which one will support Gen4 SSD if we use Rocket Lake CPU. We only miss more presence of USB ports on the rear panel , and at least a couple or 4 more would be appreciated by users with setup gamer.

This Asus TUF Gaming Z590-Plus WiFi appears for a price of 245 euros , which would be 15 euros more than the price with which the Z490 was launched. Thus, it is confirmed that each year the figures rise more, how far will they plan to go? There are no boards with this chipset below 200 euros, so we must consider it one of the best within the platform.